Art thou pale for weariness of climbing heaven and gazing on the earth, wandering companionless among the stars that have a different birth, and ever changing, like a joyless eye that finds no object worth it's constancy? Thou chosen sister of the Spirit, that gazes on thee til in thee it pities. . . -Shelley (To The Moon) 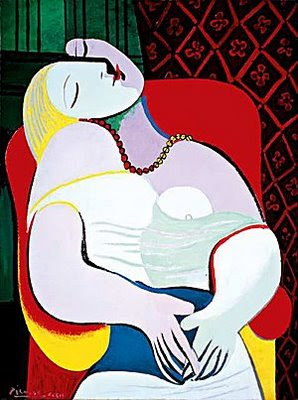 It's the coldest day of the year so far, and I'm content to remain indoors, doing some thinking. I'm also content to remain on the North American continent, as a fairly sedate and sober writer, instead of doing a job most would consider to be glamourous. There isn't anything glamourous about a bespectacled writer who teaches piano and snowshoes through the park - or is there?

Above is 'Le Reve' by Picasso, and to the right is 'The Ballerina' by Cezanne
The penguins in Patagonia
are mysteries to me,
all of Europe evades.
I did not become the ballerina
I dreamed of becoming,
I failed to take one superstep
down the catwalk beckoning me.
My lifelong, loving companion
has not yet arrived,
and neither are my composed words 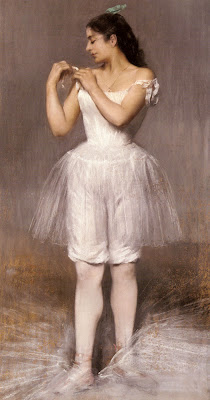 soul-tinged compared with Dickenson's.
I have, though, held time
in my hands and shaped it. . .
gave it wings. . . let it rest.
I have held one billion snowflakes
in my gaze - and knew their number.
I don't try to chalk the sun
or give a phrase to every thought.
I like to know that others, too, let alone
the souls of things.
Posted by Lada No comments: Links to this post
Newer Posts Older Posts Home
Subscribe to: Posts (Atom)